After 2 years of presenting board members and important actors in EFFORTS, we are now changing this section into the presentation of our community members.

Through our work in the Balkan region and the Interreg Europe FORTITUDE project, we are happy to welcome in 2020 Herceg Novi (Montenegro) in the EFFORTS community !

KANLI KULA FORTRESS
Kanli Kula (Bloody Tower) is a monumental fortress in the Old Town, located in its northernmost part, constituting its complex fortification system. The Tower was built on a limestone rock, 85 m above sea level and, with its size and position, it dominates the town.

The first mention of the Tower in written documents goes back to 1664, namely in a travelogue of Evliya Celebi. It was built on foundations of another fortress. Its present form is a work of Ottoman builders and it has managed to preserve architectural originality of this period. However, when other cultures gained control over the town, they left their recognizable impact on the Tower. Therefore, today we can see traces of the Venetian and Austro-Hungarian architecture in it. The irony of this tower lies in a possibility that it was built on the foundations of another structure which was humanitarian in its nature, since it has an inscription ”PRO PACE” which translates into for peace and thus differs greatly from the harrowing name of ”Bloody Tower”.

After suffering severe damage, the Venetians conducted architectural interventions, particularly after 1687, when they took over the city from the Ottomans, whose rule lasted 200 years.

There is a well-preserved cistern within the Tower, which, in time, lost its primary function and became a prison cell. Even today, its walls show carved decorations, such as different types of galleys, fish, crosses, dates and emblems.

The Tower’s interior was first reconstructed in 1960, when it was transformed into a summer stage, one of the most beautiful open-air stages of the entire Adriatic coast, with a capacity of over 1500 seats and an amphitheatre of rare beauty and functionality. The reconstruction was carried out in the Venetian style. The fortress was restored once again after the earthquake of 1979, when it gained its present-day appearance.

The fortress, which in its turbulent past witnessed intertwining of various cultures, today is a true oasis of culture and pride of citizens of Herceg Novi and a generator of numerous cultural and artistic events. These include: festivals (Montenegro Film Festival, Jazz Festival, Operosa Montenegro Opera Festival), regional concerts, theatre plays, cultural and artistic programmes and many other events. A good example of synergy of cultural historical monuments, arts and innovative approach to presenting historical events through digital contents, Kanli Kula Fortress is today a place where history is told through technology of augmented reality.

SPANJOLA FORTRESS
Spanjola Fortress was built by the Spanish in 1539, although there remains a doubt around the fact that the fortress could have been built in less than a year. After they took the power from the Ottomans, in their short one-year-long rule, the Spanish mainly reconstructed the town’s fortresses and towers. This includes also Spanjola Fortress, as the local population called it, although another name was found in written sources (maps and engravings) – ‘’Upper Town’’.  There was an underground route from the fortress to the town. Today’s appearance of the fortress comes from the period of the second Ottoman’s rule (from 1548), when the Ottomans destroyed a smaller fortress and built a new one. Oriental architecture and Arabic inscription above the entrance to the fortress bear testimony to these events. The fortress is located on the Bayer hill, at the northwestern part of the town, at about 170m above sea level. The fortress provides a magnificent view of the entrance to the Boka Bay. Despite having changed its rulers, the fortress has managed to preserve its original appearance.

FORTE MARE FORTRESS
Forte Mare Fortress (Sea Fortress) is located on the mere coast and is one of the most beautiful examples of fortification architecture, and there exist rather realistic indicators suggesting it was once a nucleus of the Old Town.

It was built in the period between 14th and 17th century, reconstructed in 1833 and since 1952, adapted for a summer cinema. The fortress was built on solid rock, and the walls contain a passage leading to the sea coast from the top of the fortress.

The upper side has the ‘’SEA GATE’’ (Porta di mare), with preserved construction elements from the period of Bosnian rule.

The legend says there is a secret gate of the town of Herceg Novi. Gate at the sea coast opens only to friends of the town. Who isn’t welcome there, won’t be able to pass through it. The enemy, according to the legend, has never been able to open it. Now, the sea waves break over this gate. It keeps a story of the town and its beauty, gates, people, beautiful girls who were taken away by ships to faraway lands. It’s a long and endless story and every citizen of Herceg Novi can tell you something about it, their version of the town’s beginnings, of its beauty beneath the sun. 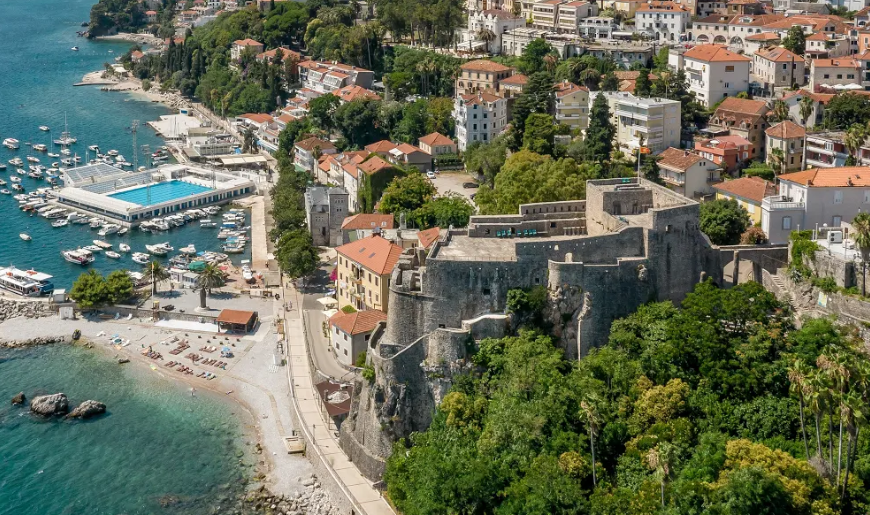