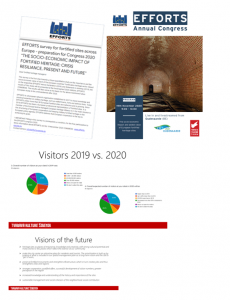 The EFFORTS SURVEY on Socio-Economic Impact of fortified sites stays open, so as to optimize the collection of data from all fortified sites. If you have not done this, you can fill in the survey on https://forms.gle/96iPtwJLt6fg4xai6 until 1 February 2021 !

The survey, set up with Fortress of Culture SIBENIK (HR), was the center of the EFFORTS Congress.

The EFFORTS survey on the socio-economic impact of fortified heritage in Europe has – so far -encompassed 40 respondents – fortified heritage managers from 12 European countries. The majority of respondents were local public authorities. The respondents have a range of financial and human capacities enabling them to manage fortified sites, and make a social impact within their communities: fortified heritage is restored, renewed, researched, reused and opened to communities. New contents and interpretations are being developed at sites – with tendency to include a variety of digital technologies and innovative storytelling techniques among a large number of sites.

The results of the survey will be used as a basis for the Europea Fortification Heritage Impact Study in 2021.

for the full congress’ live registration and its presentations  :